The #dementia hashtag has been showing-up on Twitter a fair bit lately. This is due in no small part to British Nurses hosting an online chat and gathering resources under the #WeNurses social media portal: see their chat info and transcript here.

It’s had me thinking back to my first experiences of nursing the person with dementia, of being a dementia nurse newbie. 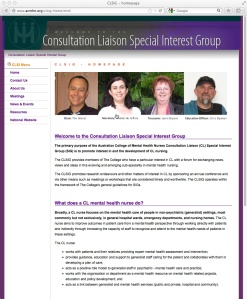 Since those early days as a nurse I’ve come across dementia in a number of roles, most frequently when working as a Consultation Liaison (CL) Clinical Nurse Consultant (CNC). CL CNC is a role where mental health assessment, support and education is provided in the general hospital setting in partnership with the clinical staff working there. Dementia isn’t usually part of a mental health nurse’s day-to-day work, but it is a frequent trigger for referral to a CL mental health nurse. In a 2005 survey of Australian CL nurses the “Four Ds” of common CL presentations were identified: Delirium, Dementia, Depression and Deliberate self-harm (Bryant et al, 2007, p 34). These four conditions aren’t mutually exclusive, of course. In fact, somebody with dementia (even very early stage) is much more prone to developing delirium and/or depression. Additionally, there are very clear links between dementia, depression and deliberate self harm.

Anyway, back to the subject. The prevalence of the dementia hashtag on Twitter reminded me of the clinical placement where I first encountered dementia amongst the residents of a large nursing home. Being new to nursing and new to dementia I felt pretty baffled at first. Luckily there are some secret weapons to feeling baffled: they’re often found in literature, art and music.

In 1989 Elvis Costello released a song he co-wrote with Paul McCartney called Veronica. The story I’ve heard is that the song was about Elvis Costello’s Grandmother who had dementia. As we know, dementia is a progressive, irreversible brain condition that results in cognitive and physical decline with some fluctuations in alertness and lucidity. Dementia can leave many long-term memories fairly intact, but makes laying-down new memories very difficult. The song Veronica captured the fluctuations in mood and memory beautifully, and was a timely, poignant accompaniment to my clinical placement.

Veronica by Elvis Costello helped me a lot when I was a newbie to nursing the person with dementia; maybe the song will help other dementia nurse newbies too.

Is it all in that pretty little head of yours?
What goes on in that place in the dark?
Well I used to know a girl and I would have
sworn that her name was Veronica
Well she used to have a carefree mind of her
own and a delicate look in her eye
These days I’m afraid she’s not even sure if her
name is Veronica

[Refrain:]
Do you suppose, that waiting hands on eyes,
Veronica has gone to hide?
And all the time she laughs at those who shout
her name and steal her clothes
Veronica
Veronica

Did the days drag by? Did the favours wane?
Did he roam down the town all the time?
Will you wake from your dream, with a wolf at
the door, reaching out for Veronica
Well it was all of sixty-five years ago
When the world was the street where she lived
And a young man sailed on a ship in the sea
With a picture of Veronica

Veronica sits in her favourite chair and she sits
very quiet and still
And they call her a name that they never get
right and if they don’t then nobody else will
But she used to have a carefree mind of her
own, with devilish look in her eye
Saying “You can call me anything you like, but
my name is Veronica”

Nurses (#wenurses) are referred to in the lyrics: “And they call her a name that they never get right, and if they don’t then nobody else will.” It’s especially important for we, the nurses, to be fully present when dementia has made the person’s own presence tenuous, brittle.

We Nurses are fortunate to have art, literature and music to inform our empathy and build our emotional intelligence. Neither empathy or emotional intelligence are exclusive to nursing, of course, but both are core nursing qualities. I found those qualities, as they relate to nursing the person with dementia, in Elvis Costello’s song in 1989, and again by following the #wenurses and #dementia hashtags on Twitter in 2012.

1 thought on “On Being a Dementia Nurse Newbie”

Understanding Cannabis in Clinical Practice.
May 15 = the Feast of Saint Dymphna
Congratulations to the @cairnshinterlandhhs 2022 International Nurses Day award winners: