Dear Australian Student Nurses yet to be offered a Graduate Nurse position,‬ 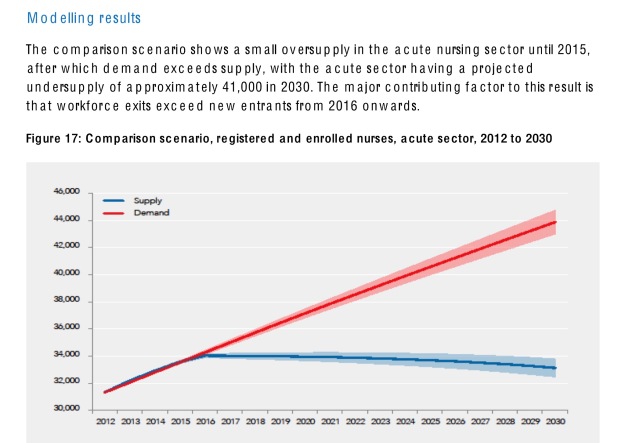 39% of Australia’s nurses/midwives are aged 50+ (not that there’s anything wrong with that). 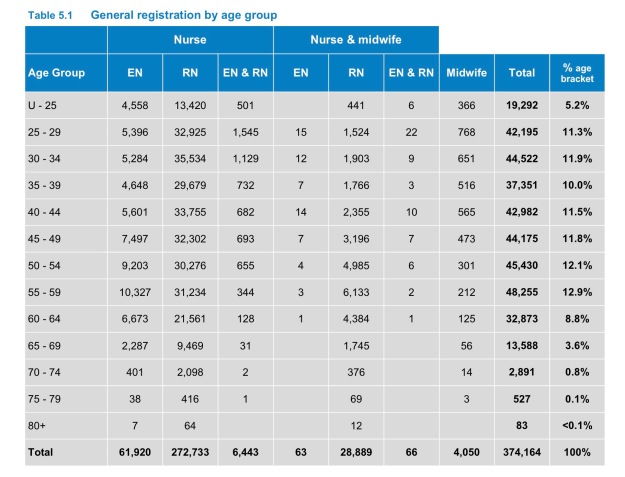 Look, I don’t really know what I’m talking about. I was in your position in 1991, and I remember it feeling daunting then. I have no real idea what it’s like to be a new grad in Australia in 2016/2017, and don’t have any detailed understanding of Graduate RN hiring processes around the country. With that disclaimer out of the way, here’s my 2 cents worth:

1. Nurses graduate in packs, but retire one by one. Today there are about 8000 freshly minted Australian RNs wondering if they’re going to get a gig. I don’t know how many of existing RNs are on the verge of retirement, but the demographic info in the table above would suggest at least 8000 will retire within the next year. Have you read the small print in the ‘Modelling Results’ chart above? The last sentence reads, “The major contributing factor to this result is that workforce exits exceed new entrants from 2016 onwards.” [page 37] Be patient. The jobs will become available.

2. If it’s practical to chase the work (ie: go rural/remote) do so. You’ll pick-up some deadly skills, and will be a better future employment prospect than someone who hasn’t worked as a RN.

3. Have you heard the cliché re not waiting for Mr/s Right, and being comfortable with Mr/s Right-Now? Same with your first few RN jobs: anything will do to get your foot in the door. Don’t knock back an unappealing gig. Quitting is quicker/easier than applying.

4. You know that other cliché “It’s not what you know, it’s who you know”?
It’s not quite accurate.
It’s who you ARE, and who knows it.
If you’re well suited to a particular speciality/hospital/ward make sure that it’s not a secret. Make sure you’re friendly with all staff, but be especially sure that the senior staff (the people with their hands on the levers) know that you’re an asset. If they know you’ll make their workplace better, they’ll be keen to grab you when the funding/positions allow.

5. This one is the important one. It’s REALLY disheartening to spend 3+ years working towards something, and then find out that that something isn’t there where you expected it to be.
The fragile self-confidence of a novice RN isn’t geared-up for a kick in guts like that.
It’s not just a disappointment, it’s an injury to the ego.
Be kind to yourself.
Don’t spend all your money at Dan Murphy’s.
Do fun stuff despite feeling crap.
The data tells us that there are RN gigs in the pipeline. Do whatever it takes to be sure that you’re ready when your opportunity arrives.

6. Expect to experience grief emotions. You probably remember the Kübler-Ross 5 stages thing, as a quick reminder: denial, anger, bargaining, depression and acceptance. Anger and depression are uncomfortable, but very understandable, emotions. Find a safe way to express them (pro-tip: resist the temptation to spray paint swear words on your university or local hospitals).

7. On bad days, have another look at the chart at the top of the page. Australia’s health system needs you!

8. Find things that help you stay optimistic. Music works for me. Just in case it works for you too, here’s a song of determination and defiance. Turn it up!

This blog post is yet another example of  doing a funky remix of previous work. It started out as a short Facebook post, which turned into a conversation. The original is here: https://www.facebook.com/meta4RN/posts/1353685884664226:0

As always, feedback/corrections/additions are welcome in the comments section below.

1 thought on “Dear Australian Student Nurses (a letter of encouragement, with data and a song)”

Don’t be afraid of social media. Be intentional.
Figure 1b: Spatial availability of mental health nurses across LGAs in Australia in 2017.
Australian Clinical Supervision Association Membership Certificate (leaving this here so I can find it again easily 🙂)