Ever written an article about yourself as an act of blatant self promotion? 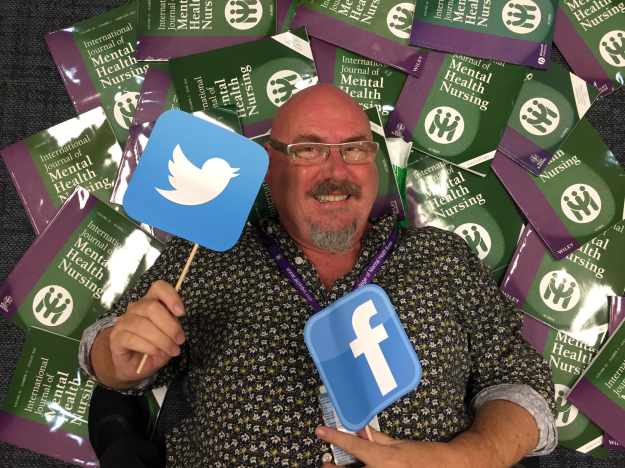 Cairns Nurse on Journal Editorial Board

Cairns CNC Paul McNamara has recently been appointed to the editorial board of the International Journal of Mental Health Nursing (IJMHN). IJMHN is now in its 26th volume, and has built a solid reputation over the last quarter century. The journal’s impact factor of 1.943 is a great achievement.

Paul was specifically invited to join the board to help develop and drive a social media strategy for IJMHN. “I’ve been very active in using social media in a professional sense for the last few years, and have presented at conferences and published about health professionals using social media.”, says Paul. “I guess that’s what caught the attention of the IJMHN Editor in Chief.”

“Twitter is my favourite platform for work-related social media. I think it will be the best fit for IJMHN. Twitter allows information to be shared with the whole world. If it’s good enough for the Pope, the US President and the Australian Prime Minister, maybe it’s good enough for mental health nurses too.”, joked Paul. “Twitter is where the influencers are. As US marketing guru Charlene Li said, ‘Twitter is not a technology. It’s a conversation. And it’s happening with or without you.’ It’s a professional trait of Mental Health Nurses to want to be part of the conversation.” When asked about other social media platforms, Paul said, “We’ll keep an eye on what develops: nothing is static on the internet. Facebook is too big to ignore, so we’ll certainly have a look at smartening-up IJMHN’s presence there too.”

Traditionally the success or failure of a journal article was measured by citations. The only way authors/researchers knew if their work was being read was when other authors referenced their paper. Now that IJMHN is purely an online publication (with an iPhone/iPad app), there is another metric that can be used – how often the article is shared on social media.

Social media can help drive visibility and brand awareness of the journal, and raise awareness of Mental Health Nursing’s work and contributions. For the first time in history, nurses have unmediated access to the public conversation via social media. “Social media provides a terrific opportunity for all health professionals to share and acquire information. It’s a fun way to do professional development.”, Paul said. “It’s also a good way to let people know who we are and what we do.” When asked for a recommendation about using social media, Paul said, “Just be aware that some of your patients, some of your colleagues, and some of your managers will Google your name. Make sure you’re in control of what they’ll find. Don’t be afraid. Be intentional. Make your digital footprint your CV.”

Paul’s professional digital footprint is built around the homophone “meta4RN”, which can be read as either “metaphor RN” or “meta for RN” – try Google or go to meta4RN.com to see what it’s all about.

This blatant piece of self-promotion could possibly also be included in a newsletter/magazine, but it’s one of those publications that’s organisation/member-specific. That means only a certain group of people will see it, and it will remain unknown to those not part of the organisation. A bit secretive, eh?

Maybe a modern reworking of the biblical “don’t hide you light under a bushel” thing could be, “don’t just do stuff – blog about it!”

As always your comments/feedback is welcome below.

Wouldn’t it be handy if you had a comprehensive list of support agencies with you all the time?
The @CairnsHelp swing tag QR code (brochures are so last century)
Self Compassion and Post Traumatic Growth amongst Nurses in the Pandemic (Hooray for Grey Hairs!)