A while ago I met a lady who had a fantastic way of describing and understanding her experience of auditory hallucinations/psychosis. It goes a bit like this:

In the back seat are the voices. They’re like naughty kids, always chatting away amongst themselves. Often they’re taunting me.

Usually I can just ignore them and get on with driving the car.

However, every now and then the voices get real loud.

It’s distracting. Driving becomes difficult and that’s when I’m most likely to drive badly or, if I’m unable to concentrate properly, I could even crash the car.

It’s pretty scary, but I usually don’t have to come into hospital at that point. I just need more support to get control back, and maybe a change to my medication.

The worst time for me is when the voices get so distracting that I can’t focus on driving at all. I turn to the voices in the back seat and try to get them to shut up. But they’re like naughty kids yelling and jumping around the car, and I can’t get them to stop.

I take my seatbelt off and turn to face them, then somehow – I don’t even notice it happening – one of the voices will slip into the driver’s seat and take over control of driving the car.

Thats when it gets REALLY dangerous.

I’m not out of control – it’s worse than that – I have lost control entirely. I haven’t even got my hands on the steering wheel anymore, and I can’t reach the brakes.

That’s when I need to come into hospital.

At the time I met this lady she was make a tentative recovery from one of these acute episodes of psychosis. On admission she had been experiencing command auditory hallucinations, paranoid delusions, racing thoughts and suicidal ideation.

When we met the intensity of these symptoms was settling. The lady’s articulate insight helped us both communicate effectively when she had a relapse in symptoms. To keep her safe we needed to stop her from leaving the hospital, and provide an increased level of supervision/support. To get a shared understanding of this I was able to return to the lady’s metaphor:

I’m worried that you’re at risk of losing control of the car again. What I’m planning to do is take the keys away for now, and hand them back to you when you’re safe to drive again.

That’s a good way to think about using the Mental Health Act – it’s a mechanism to decrease risk/stop people from a foreseeable crash if they’ve lost the capacity to drive.

However, the real story here is about the intelligence, insight and articulate communication of a young woman who experiences symptoms of psychosis.

An impressive person, and a fantastic metaphor.

Hopefully other people will be able to make use of this lady’s metaphor as a way to understand psychosis/hearing voices. 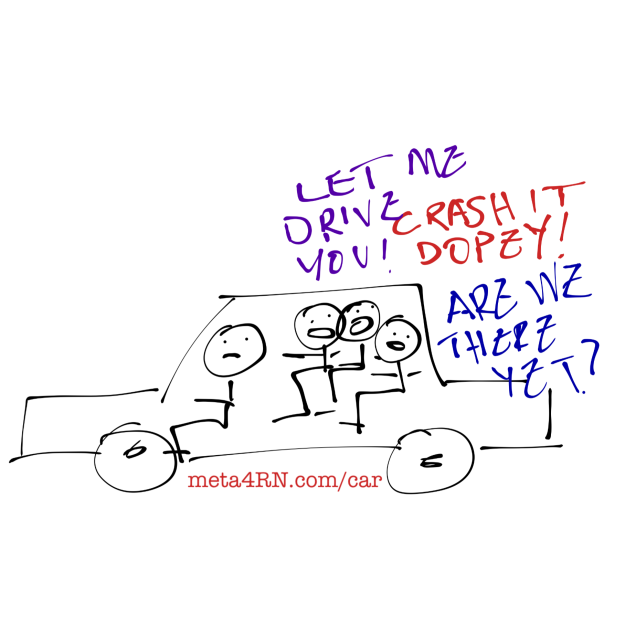 Thanks for visiting. As always your comments/feedback is welcome below.