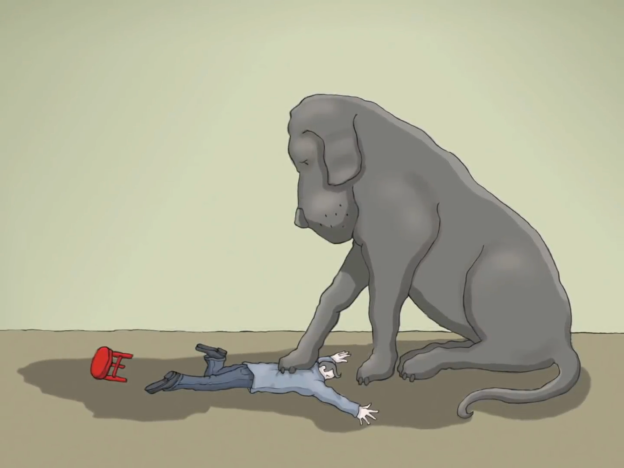 Source: I had a black dog, his name was depression https://youtu.be/XiCrniLQGYc

I work in a general hospital doing mental health clinical work and education. The two roles overlap. A lot.

A significant part of the job is undiagnosing mental illness. It’s not unusual for us to be asked to see somebody who is emotionally overwhelmed or dysregulated. Sometimes this is in the context of mental health problems, often it’s in the context of significant stress. We don’t want to psychiatricise the human condition. Of course you cry when you’re sad. Of course you’re anxious when, like Courtney Barnett in ‘Avant Gardener‘, you’re not that good at breathing in. Of course you’e frustrated when you’re in pain and/or don’t understand what’s going on.

It’s equally important to make sure that somebody who has experienced mental health problems previously doesn’t have every presentation to the hospital/outpatient clinic seen through that lens. That’s called “diagnostic overshadowing”. It’s a real problem.

Diagnostic overshadowing is where physical symptoms are overlooked, dismissed or downplayed as a psychiatric/psychosomatic symptom. It must be one of the most dangerous things that happens in hospitals. The President of the Royal Australian & New Zealand College of Psychiatrists, Professor Malcolm Hopwood, said in May 2016, “I sometimes think that the worse thing a person can do for their physical health is to be diagnosed with a mental health disorder.”

It often comes as a shock to people when they find out that those diagnosed with mental illness die between 10 and 25 years younger than the general public. The next shock comes when discovering suicide accounts for only about 14% of premature death. [source: ‘Please believe me, my life depends on it’: Physical health concerns of people diagnosed with mental illness] 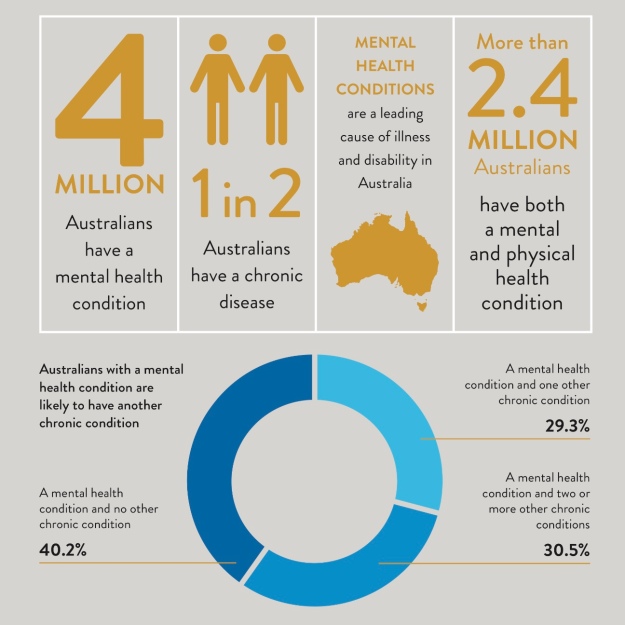 Diagnostic overshadowing happens outside of hospitals too. In this example, understandable and proportionate human emotions were misinterpreted as psychopathology. The cascade of events that followed makes for a sobering read:

With the shocking @ABSStats #suicide rate stats circulating, thought I’d share my story for 1st time. I attempted suicide in March, no one thought I’d survive but I did, luckily with no remaining physical consequences. I’d been doing a PhD & supervisor found out I had bipolar 1/6

(which was well managed, not interfering in any way) & started to see all stress (normal to a PhD) as the bipolar & decided I couldn’t do it (I’d received a scholarship for being the best commencing 1st yr PhD student in entire uni). Cue bullying & discrimination. 2/6

Uni helpful at first, advisor even indicated supervisor was sabotaging my work. That person was promoted & new one didn’t care. Supervisor got NHMRC grant & media attention & suddenly I was at fault. This bought back the depression & it wasn’t worth staying. I couldn’t get 3/6

another job. Overqualified for everything. Money ran out so I attempted suicide. 6 months later still have no job, no money, often wondering where next meal will come from. Still applying for jobs, but no luck (volunteer to ease boredom). Trying to study to get back to 4/6

a career with more job opportunities, but that will take 2-3 years. After a lot of work, mentally I’m well now (great psychiatrist & psychologist), but living this way is taking its toll, & I’m only here in the first place because of stigma and discrimination. 5/6

#SuicidePrevention is multifaceted & complex, but much more needs to be done to improve #SDOH With a better environment I would have thrived. My motivation to get the bipolar well-managed in the first place was the desire to do a PhD – that PhD, literally nearly killed me 6/6

Assuming that you – the person reading this blog post – is a nurse, midwife or other health professional, I have some questions I’d like you to reflect on.

Have I ever witnessed a person’s mental health history influence how their presenting complaint was investigated or treated?

How does my workplace prevent mental health stigmatising and diagnostic overshadowing?

What can I do to support good holistic patient care, without falling into the trap of diagnostic overshadowing?

Sincere thanks to Bec (aka @notesforreview on Twitter) for giving permission to share her tweets re mental health stigma and diagnostic overshadowing. Her first-hand account is a powerful cautionary tale.

Bec and I tidied-up this blog post and it’s now been published.

Don’t be afraid of social media. Be intentional.
Figure 1b: Spatial availability of mental health nurses across LGAs in Australia in 2017.
Australian Clinical Supervision Association Membership Certificate (leaving this here so I can find it again easily 🙂)