This week I attended the Aboriginal and Torres Strait Islander Cultural Practice Program –  a one day workshop facilitated by Stan Savo. Stan is a Cultural Capability & Workforce Advisor and he does his job terrifically well. He’s an engaging, upbeat and authentic bloke, who delivered many pearls of wisdom on the day. This blog post is about just one of them. 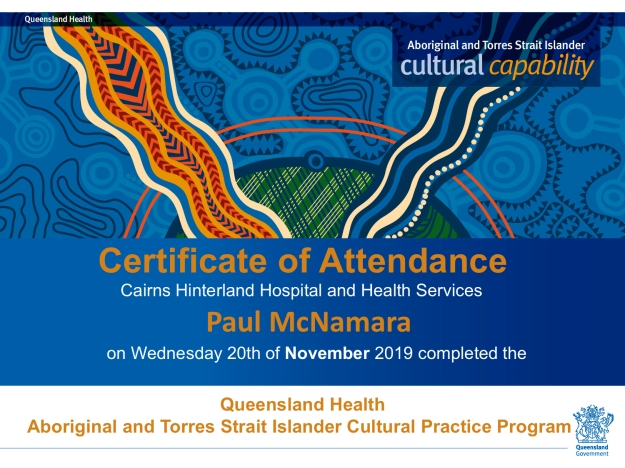 Stan spoke about it not being uncommon for Aboriginal and Torres Strait Islander people, especially those who are from a rural/remote area and find themselves in a big hospital, to be disinclined to openly disagree with staff, or to nod or passively agree just to get an uncomfortable conversation over and done with.

Although it sounds counter-intuitive at first, Stan said it’s not necessarily a bad sign if an Aboriginal/Torres Strait Islander person expresses frustration or anger with you. He said something like, “If they are growling at you maybe it’s because they think you can do better, and they want you to know. Maybe it’s a good thing.”

It was timely information for me. An Aboriginal man I’ve been working with was really angry with me the day before the workshop. He was a bit sweary (it wasn’t abuse, it was lalochezia) and clearly frustrated, but he was making sense. He said I should have seen him more promptly than I did after he had let a nurse on the ward know he was having an increase in psychiatric symptoms. I apologised, and we shook hands at the end of the session, but he was still cranky with me. I was worried that I had buggered-up our therapeutic relationship. Rapport and trust take time and effort to establish, but can be lost quickly and easily.

I saw him again yesterday, and we chatted for nearly an hour. Our conversation was half about clinical stuff, and half about non-clinical stuff (“non-clinical conversation” also known as “yarning” in Aboriginal/Torres Strait Islander terms, or “phatic chat” in whitefella way). In keeping with the rupture-and-repair nature of relationships, our therapeutic relationship had a rupture on Tuesday and was repaired on Friday. Just as Stan Savo said, being growled at isn’t necessarily a bad thing.

How does a white middle class nurse like me feel OK about being growled at? It feels bad, and sometimes a little scary, when someone gets angry with you. Here comes a white middle-class reframe (it’s probably the whitest thing you will read today):

If I go to a new restaurant and the food/service is a bit underwhelming, I pay the bill, leave, never go back again, and if anyone asks about the restaurant I’ll probably tell them not to bother.

However, if it’s one of my favourite Cairns restaurants, it’s a different matter.

For example, I’ve probably been to Mondo about a million times in the last 20-something years. On a couple of those million occasions my favourite dish (Sizzling Mexican Fajitas!) has been not up to scratch. On both occasions I let the wait staff and kitchen staff know that today’s fajitas were not at the usual standard. It’s a bit uncomfortable, but it’s important. I care about Mondo’s Sizzling Mexican Fajitas being good. Even if it’s a rare occasion, if they’re not good I want to make sure that staff know that there’s been a slip-up. It’s a bit awkward, but in reality – even though I’m not on their payroll – I’m helping helping the Mondo quality assurance program.

I don’t complain about dud meals in restaurants I don’t care about. I just don’t go there anymore.

I do complain about dud meals in restaurants I care about. I want to go back, so offering an honest critique is an investment in their quality.

Criticism can be complimentary, in both senses of the word: it’s free and it’s an expression of approval. Approval, as in, “I know you can do better, and I’m encouraging you to do so.”

If someone is growling at us, let’s resist the reflex to get defensive or hurt, and listen for helpful suggestions. This is especially important in the tricky business of crossing cultural barriers, where often we don’t even know what we don’t know.

Stan Savo’s workshop was full of pearls of wisdom. This blog post has honed-in on just one of them. However, I know it wasn’t Stan’s closing message. This was:

Thanks for reading this far. As always, your feedback is welcome in the comments section below.

This work is licensed under a Creative Commons Attribution-NonCommercial-ShareAlike 4.0 International License